The last cycles Orbits is the result of fascination with Einstein’s theory of relativity, which regardless the constant attempts to disapprove a part of scientific presumptions being its basis, survives and evolves due to modern scientific methods mostly resulted from the new technologies. 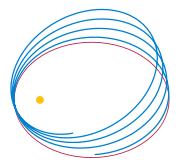 "Precession of apsides - In general relativity, the apsides of any orbit (the point of the orbiting body's closest approach to the system's center of mass) will precess-the orbit is not an ellipse, but akin to an ellipse that rotates on its focus, resulting in a rose curve-like shape (see image above). Einstein first derived this result by using an approximate metric representing the Newtonian limit and treating the orbiting body as a test particle. For him, the fact that his theory gave a straightforward explanation of the anomalous perihelion shift of the planet Mercury, discovered earlier by Urbain Le Verrier in 1859, was important evidence that he had at last identified the correct form of the gravitational field equations.
The effect can also be derived by using either the exact Schwarzschild metric (describing spacetime around a spherical mass) or the much more general post-Newtonian formalism. It is due to the influence of gravity on the geometry of space and to the contribution of self-energy to a body's gravity (encoded in the nonlinearity of Einstein's equations). Relativistic precession has been observed for all planets that allow for accurate precession measurements (Mercury, Venus and the Earth), as well as in binary pulsar systems, where it is larger by five orders of magnitude."

Less ideal than the circle, ellipse with its movement along the same, under the condition that one focus in the center of that circular movement makes a rosette.

This complex shape is the orbit of all planets around their suns, except in case if their orbit is not a regular circle which is a more rare case. In our Solar system none of the orbits is a circle.

A rosette is often used in architecture already in the Middle Age, and especially in the Age of Renaissance, without knowledge about its planetary meaning, then probably due to its interesting structure and the possibility of variations.

This is where the second fascination lies. Right from the possibility of shape variations at establishing the relationship by creating ellipse and its movement, results the unlimited number of artistic creations. If additionally carried away with change of viewpoint, perspective and light/shade, without the need to use colors, it is possible to three-dimensionally shape the space by two-dimensional presentations.